Putin has a reputation in the West as an action-oriented man, not as a strategist. At the time of Joe Biden’s assumption of power, the former president had bluntly declared Vladimir Putin a “killer” to the enragement of Russians. Here we have listed the countries supporting Russia & Ukraine.

Some or all of these organizations would rush to President Putin’s aid if Russia invaded Ukraine, despite the organization’s reluctance to deal with internal issues.

Azerbaijan (not a CSTO member) is also expected to ignore any calls for rising against Russia during a conflict. Russia’s president brokered a truce between Armenia and Azerbaijan, raging in Nagorno-Karabakh.

A ceasefire pact was only achieved after Putin’s intervention, despite the entire world calling for the war to end. A subsequent Russian deployment aimed at preventing a new ethnic conflict was placed around the disputed area. Even if Azerbaijan does not openly support Russia, it is almost sure that it won’t join forces against it.

Iranian support for Russia would go further towards the Middle East. The Iranian leadership consistently courted Russia for a rejoinder after the Nuclear Deal fell apart.

Russia has supplied arms to Iran and has cooperated with it during the Syrian war, amid rising tensions between the US and its allies on the one hand and Iran on the other.

After Qasem Soleimani’s assassination, Washington and Tehran’s relations thawed. Moscow condemned the attack without ambiguity. Iran is expected to support Russia wholeheartedly as it continues to be subjected to sanctions by the US.

However, one of the most critical factors is that the world’s largest economy, the so-called ‘Asian Dragon’ – China, is one of Russia’s major trading partners. Over the past few years, Moscow has strengthened its partnership with Beijing as tensions between the West and China have continued to escalate.

It is a known fact that both Russia and China are partners on a multi-dimensional basis, with a wide range of cooperation from business to the military to space. According to the Chinese government, the US should set aside the mentality of the Cold War and take seriously the security concerns that Russia holds. China would not hesitate to support Russia in the event of a conflict.

In the article we published today, we covered the countries supporting Russia. 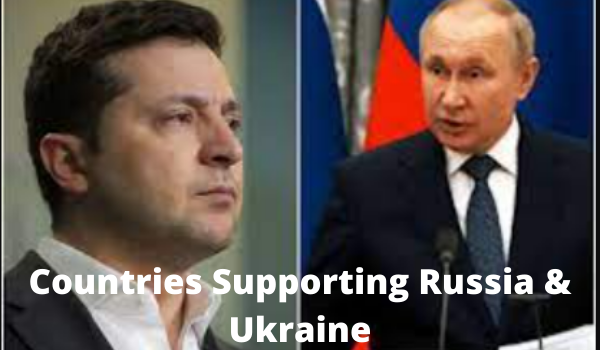 Germany and France made a hurried visit to Moscow recently to defuse the controversy that has newly erupted. The United States and Canada halted approval of the Nord Stream 2 pipeline after President Putin recognized two breakaway regions of Ukraine as independent nations and sent Russian troops there.

As a result of Russia’s recognition of the two Ukrainian provinces of Luhansk and Donetsk as independent countries, Japan, South Korea, Australia, and Canada are all supporting Ukraine.