Home » Global » How Many Warheads does Russia Have?

So far the world has only witnessed nuclear attack twice, both during WWII. But the current war between Russia and Ukraine has the world worried about how far Vladimir Putin is willing to go. The chances of a third World War are not totally absent. There are nine countries with nuclear weapons and most of them do not intend to use them but Putin is different.

Putin has been threatening the USA with nuclear war for a while now, placing missiles close enough to get to the capital of USA. Ukraine would be lost if attacked with nuclear weapons. News just in, he is already using illegal cluster bombs in civilian areas of Ukraine. Kharkiv is under BM-21 Grad attack right now. It is used for ‘area denial’ and not for direct attacks on civilians.

Putin is bordering on war crimes already and he has ordered his nuclear forces to be ready for “enhanced combat duty”. Russia does have the most nuclear weapons.

This is either Putin having gone crazy because what he is doing will have him prosecuted eventually. Or, he is being very calculative in doing what he can get away with and still manage to scare the world into giving into his demands and Ukraine to surrender, without actually going full nuclear. So, if Putin does use all his deployed nuclear warheads, what do we have in store?

The Treaty on the Non-Proliferation of Nuclear Weapons (NPT) prevents Russia, USA, UK, China, and France to wield it as easily as the USA did in Japan back in 1945. India, Pakistan, and Israel have not signed the NPT yet. North Korea backed out of the Treaty in 2003. These are all the countries with nuclear weapons successfully tested so far. 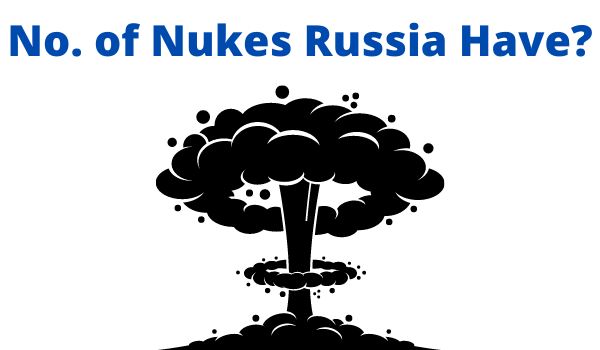 The current Russian nuclear arsenal is the largest, followed by the USA. If Russia and the USA go to war, there will always be a theoretical chance for nuclear war once again.

Russia has 6,257 nuclear warheads of which 1,456 are currently deployed. It has conducted official nuclear testing 715 times.

Of these, the nuclear missiles of Russia, USA, China, and India have the triad delivery method.

Currently Russia has three variants of torpedoes ranging between 20 and 150 kilotons and more than ten types of RDS bombs. Out of them, the RDS-220 Tsar bomb is the most powerful. It was tested at 50 megatons but Russia has a 100-megaton design.

Russia also has about 24 listed models of Intercontinental Ballistic Missiles. Details on them are mostly unknown.

Don’t Be Too Worried Yet

Despite committing war crimes in Ukraine already, it is unlikely that Russian nuclear weapons will be wielded. International Humanitarian Laws (IHL) will come into effect if nuclear weapons are used. The NPT does not make the world fully immune to nuclear warship but the IHL would classify nuclear war under war crimes for its obvious effects if not for the act of wielding one.

The kind of nuclear weapons the nuclear-weapon states (NWS) have in this generation will cause more damage than Hiroshima or Nagasaki. Hence, any nuclear war is a war crime according to the Laws of Armed Conflict. Generational DNA damage and intended civilian massacre are only some of the reasons to classify nuclear war as a war crime to the prosecution of which, Putin is not immune.

4th Wave of Covid-19 in USA, India, China and Other Countries0 Total Shares