To increase their comedy content, Netflix has partnered with British comedy legend Rowan Atkinson, best known for his roles in Mr. Bean and Johnny English. A new 10-part series titled Man vs. Bee, which will premiere on Netflix worldwide on June 24, 2022, will be available in multiple languages. Atkinson and his longstanding partner William Davies will return to the writing room for Netflix’s Man vs Bee, as the two had previously collaborated on the Johnny English trilogies.

Rowan Atkinson will make a welcome return to the comedy series in Man Vs Bee, a new Netflix series about a man’s battle against a problematic insect.

With the worldwide popularity of his farcical character Mr. Bean, Atkinson is a recognizable face to millions of fans all over the globe. Netflix will hope that the star can establish a connection with global audiences. 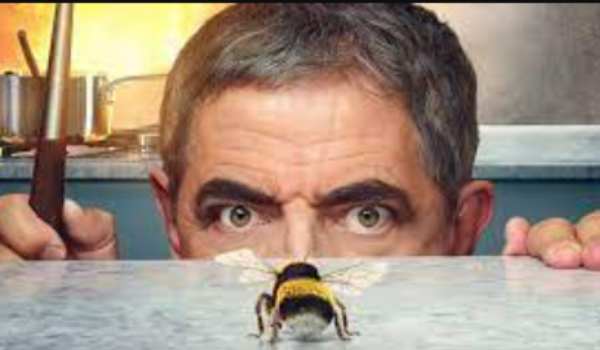 In collaboration with Will Davies, who he previously worked with on the Johnny English film franchise, Atkinson has devised a new television series. Here’s all we know about the program, which is guaranteed to generate much interest among fans.

The comedy series will premiere on Netflix on Friday, June 24, 2022, at 12:00 a.m. PT/3:00 a.m. ET. The premiere will take place in all around the world on Netflix. If you live in the Midwest, you may anticipate the show to be released at 2:00 a.m. CT on the day it is scheduled to be released. The first season comprises a total of ten episodes, with each episode lasting between ten and twenty minutes.

Along with Rowan Atkinson, we now have a list of additionally confirmed actors who will appear in Man Vs Bee. Nina, a mansion owner whose property is being housesat by Rowan Atkinson’s character, has been cast in the film, with Crazy Rich Asians actor Jing Lusi taking on the part of Nina.

Nina’s husband Christian is played by Julian Rhind-Tutt (Bridget Jones’s Baby), the Gardener is played by Greg McHugh, and White Lines actress India Fowler appears as a character called Maddy in the film.

Trevor’s ex-wife, played by Claudie Blakley (Manhunt), and Trevor’s police officer, played by Tom Basden (After Life), round out the ensemble.

Netflix released the following statement to explain the idea of the new series: “In this hilarious comedy, renowned actor and comedian Rowan Atkinson takes on a new role as a new character. In the course of house-sitting a magnificent home, a guy finds himself at battle with a bee. Who will be victorious, and what irreversible harm will be done as a result of the outcome?”

The program is one of many that Netflix is producing in the United Kingdom after the streaming giant established a team in the nation to grow production there.

Vice President of Production for the Original Series As Anne Mensah explained, “establishing a team entirely based in the United Kingdom was always about being able to better connect with the fantastic program-makers we have here — to provide a space for writers, producers, and directors to work in a friendly and familiar environment while also giving talent the opportunity to create shows that will have an impact on a global level.”

A. David Kerr, who directed Johnny English Strikes Again, is in charge of directing this season’s episodes. Fresh Meat, Inside No. 9, Webb Look, and That Mitchell are among the films for which he has directed.

‘A guy finds himself at battle with a bee while housesitting for a wealthy family,’ according to the blurb for the series.” “Who will prevail, and what irreparable harm will be done due to the outcome?” Only 10 minutes will be spent on each episode of the mini-series, shown in ten parts.

It was one of seven shows commissioned by Netflix UK Scripted Boss Anne Mensah in late 2020, as the streaming service stepped up its efforts to produce original UK content. The program, which will premiere on June 24, includes Mr. Bean actor Rowan Atkinson and Johnny English creator Will Davies.

A production company owned by Atkinson, Davies is penning the script, and Davies and Chris Clark are the executive producers. The direction is by David Kerr. A unique short-form Netflix program, Man vs. Bee, has ten episodes ranging from 10 to 20 minutes.