On Wednesday, the Uttar Pradesh Madhyamik Shiksha Parishad (UPMSP) announced that the Class 12 English test would be canceled in 24 districts because of an alleged paper leak. The UP 12th Board Exam 2022 for English was planned to be conducted on March 30, 2022, from 2 pm to 5 pm as per the various sources. Read the article to know about UP Paper Leak News – Paper Cancelled, New Date & Updates.

On the sixth day of the current high school and intermediate exams in Uttar Pradesh, a question paper for the Intermediate English test was leaked in the Ballia region of the state before the exam was held the following day on Wednesday. The English exam was scheduled in the second shift from 2 pm to 5.15 pm in 75 districts throughout the state. 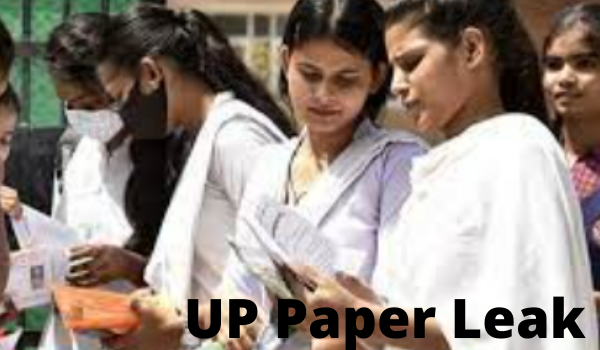 UP Board English Paper Cancelled

At 2 pm yesterday, March 30, 2022, the UP Board English Exam for students in Class 12 was set. After it was discovered that the paper for the Uttar Pradesh 12th Board English test had been leaked before the exam’s start, the exam was canceled in all 24 districts.

“The Intermediate English Paper planned on March 30, 2022, at 2 pm in the following districts has been canceled due to a paper leak. In the other districts, the test will be held as planned, according to the time table.  According to a formal notification issued by UPMSP.

UP Board English Exam New Date

The University of Punjab has announced that the English test scheduled for today will be on April 13, 2022, rather than tomorrow. Students are skipping the board test in large numbers this year. The number of students that skipped the board exams this year was the largest in at least the previous ten years, which is significant.

According to the board, more than 4.18 lakh students, including kids from classes 10 and 12, missed the Hindi exam on the first day of the exam, conducted in two shifts. Around 70,200 pupils failed to show up for their language exam, held on March 26. As a result of the steadily growing number of dropouts, authorities have been compelled to begin an investigation into the situation.

Additionally, to determine the cause of the high dropout rates, Chief Secretary for Secondary Education Aradhana Shukla has asked the UPSEB secretary to convene an active committee with the assistance of district inspectors. But it has also emerged that high dropout rates may be linked to the COVID-19 pandemic, which has been linked to an increase in dropout rates.

The English board exam for 2022 will be held in the second shift in all other test centres, except these 24 districts, following the scheduled timetable. According to the board, a new date for the English exam that was canceled will be announced shortly. According to official sources, authorities have requested that the Special Task Force of the Uttar Pradesh Police investigate the situation.

Gulab Devi, the minister in charge of secondary education in Uttar Pradesh, said that: “The English question paper for class 12 has been leaked in Ballia, according to the latest reports. It is being investigated, and anybody found to be responsible will face severe consequences.” Upon being questioned about why the test was cancelled in just 24 districts, Gulab Devi responded by stating that the question paper leaked was only circulated in the 24 districts where the exam had been cancelled before.

“The English test is now being conducted in the remaining 51 districts.” Deputy Chief Secretary for Secondary Education Aradhana Shukla has stated that the class 12 English test would be cancelled in all 24 districts. “Preliminary information about the question paper was released before the test began. There is an investigation into the situation “Mr. Shukla expressed his thoughts.